The Wicked + The Divine is totally something I judged by its cover, by which I mean I saw a preview image of the cover for issue number one floating around and decided that I needed to read it.

The premise helped considerably; as I’ve said multiple times, I’m a sucker for mythology of any kind. I’m also a music fan (who isn’t, really?) and I know too well the feeling of being so invested in a band that it becomes an enormous part of your identity. Plus, gorgeous artwork and beautiful colors. There’s nothing not to like.

A brief summary: The Wicked + The Divine follows Laura, a normal human who finds herself entangled in the affairs of the Pantheon and twelve (ish–we meet them over the course of the narrative) people who find themselves to be reincarnated deities. For two years, they live as glorious pop stars, inspiring orgiastic rapture in their fans. Also, drama, power struggles, and puns.

The Wicked + The Divine happened to come out around the time I graduated college and suddenly had time to read things for fun. It’s been a slow swan-dive into comics hell ever since then, and this beautiful, terrible, painful comic is part of the reason I have big heart-eyes constantly for the medium. And no issue sums up the beautiful, terrible, painful nature of the medium than issue eleven of The Wicked + The Divine.

Warning: MAD SPOILERS BEYOND THE CUT. LIKE, ALL THE SPOILERS. AS A PERSON WHO DOESN’T NORMALLY CARE ABOUT SPOILERS, I’M TELLING YOU RIGHT NOW THAT YOU SHOULD REALLY READ THE COMIC BEFORE READING THIS POST BECAUSE THE REVEALS, TWISTS, AND SURPRISES ARE SO GOOD YOU’RE GOING TO WANT TO EXPERIENCE THEM FOR YOURSELF.

Part of The Wicked + The Divine‘s style is the covers. They’re gorgeous, for starters, but they’re also immediately distinctive from most other comics covers. Each one features a headshot of a different major character, with the title superimposed over their face.

And then there’s issue eleven, which takes ‘headshot’ to a new meaning. Instead of being a portrait, it’s a pair of shoulders and a bloody stump where a head ought to be. We have no idea who the shoulders belong to, only that this is a break in the pattern and very, very disconcerting.

Another stylistic aspect of the series is the pull quotes used on the back of each issue. They’re pulled directly from the comic itself, but often add an additional dimension if read after the comic’s over. In the case of issue eleven, that pull quote is:

NO ONE GETS A HAPPY ENDING

For a comic where most of the main characters are going to die after two years, that’s true enough. And we’ve already seen a fan favorite die. We know the characters aren’t safe.

So The Wicked + The Divine plays with us a bit. We start out with Laura, the psychopomp for our descent into Fandamonium, the kind of audience stand-in that’s necessary to this kind of comic. She’s a diehard fan of several of the pop gods, and it’s her enthusiasm we ride on until we feel it ourselves. Laura also gives rise to most of our wishes; she lusts after the gods, she wants her own powers, she realizes that’s dumb because that means she’ll die in two years, and she develops little tests to see if she has god powers. It works, once, after Lucifer’s death, and for one shining moment she thinks she might be a god herself.

Laura gets a visit from Ananke, who seems to be the leader/wise old owl of the pantheon (possibly by sheer age alone). And then we get a nice, reassuring page:

Should we be trusting the narrator? No, probably not. But we do anyway, because we really want to believe it.

We cut to Baphomet, who’s currently in search of more power and a lifespan longer than two years. He hopes to kill Inanna and take his power. We like Inanna. We might like Baphomet too, but we hope that something’s going to stop Baphomet from killing Inanna. Only it doesn’t, because this is The Wicked + The Divine, and while Baphomet is certainly divine, he’s also a whole lot of wicked.

So that’s it, right? That’s whose head was conspicuously missing on the cover. Mystery solved. Because who else would it be? Maybe Baphomet will face divine justice, but maybe we don’t care all that much about that anymore because we liked Inanna, dammit, and maybe that shirtless, pun-slinging bastard deserves what’s coming to him.

Cut back to Laura and Ananke. Ananke’s eyes go all glowy, as they did when Cassandra was revealed to be Urðr, one of the Norns.

Oh, we think. Oh. Yes. Yes. I have waited for this. Yes. Laura’s one of the Pantheon. I get to safely live out my dream of being a pop star god through this character that I’ve been following for eleven issues yes yes yes yes

Cue an Alice In Wonderland/magical girl transformation sequence and then bam, Persephone., part time vegetation goddess, part time Queen of the Underworld. Life and death. Beautiful. We’ve been waiting for this moment. She opens her mouth to sing, and then– 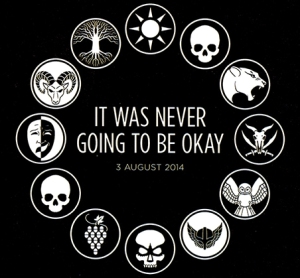 And then you throw the issue on the ground because you’re overcome with emotion and you’ve been tricked and it hurts and you wanted this so badly but what did you expect, really? Did you expect two years of glory and excitement and power, or did you know deep down that everything was going to end in fire and blood and your love was going to be directly proportional to your hurt? Did you really think that blank space where a head ought to be belonged to Inanna, or was that a lie you told yourself because it’s going to be okay? How much did you believe those words versus how much did you want to believe them?

Self-indulgent fangirling aside, this issue played brilliantly with my emotions. Gillen, McKelvie, Wilson, and Cowles knew exactly what I wanted and gave it to me exactly as beautifully as I wanted it.

Even if we’re nothing like Laura, we are –we want to see ourselves as gods. We imagine what mythological figure we’d best embody and what music we’d make and what it would be like to have people in love with us for it. We live vicariously through her snapping her fingers and wanting to see a spark. She gets everything she dared want and it doesn’t end well for her.

I’ll let other people write about the grand meaning there; for me, it’s all about how strongly this issue made me feel. It’s the perfect combination of art and writing; it’s everything comics can be.  It might work in other media, but the way I can visit and revisit the front and back covers with new perspective adds something excellent without making me feel like I’m cheating for trying to get some hint of what’s to come.

If you’re not already reading The Wicked + The Divine and you decided to ignore my spoiler warning and read this anyway: please go read this comic. It’s beautiful in every sense of the word; powerfully written, excellent illustrations, lively and engaging dialog, totally unique story. It inspires the kind of fandom that it’s about, because the way it’s written, illustrated, and colored embodies that passion. It’s bold, fresh, colorful, modern, pop, and like pop, there’s a lot more at work beneath the surface than you might find at first.

For more about issue 11, check out writer Kieron Gillen’s writing notes. Yeah, yeah, death of the author and all that–but it really does add an extra layer of complexity and reveal the amount of planning and construction required to tell this kind of a story.

At the very least, please read The Wicked + The Divine because everyone I know is behind and I have nobody to spew my feelings at. Thanks.