It’s been a while. As much as I wanted to keep doing these, it turns out writing most of a book in a little more than a month takes up a fair bit of my time. I’m a slow writer to begin with, and getting the first draft of The Compendium of Magical Beasts written was a pretty substantial task. I learned a lot from the process–enough that I have exactly zero guilt about taking a month off from writing drabbles–and can’t wait to start working on some of the projects I left by the wayside while working on it this year.

The experience of writing a book like this, which is fundamentally different from anything else I’ve ever written, has been incredibly informative and rewarding. I know a lot more about what I’m capable of, and I’m blessed to work with such great people on this project; every time I get a new sketch from Lily in my inbox, there’s another moment of elation because that sketch! is based! on something! I wrote!

I can’t wait for this book to be out in the world, and I hope it brings people as much joy as it brought me to write it. 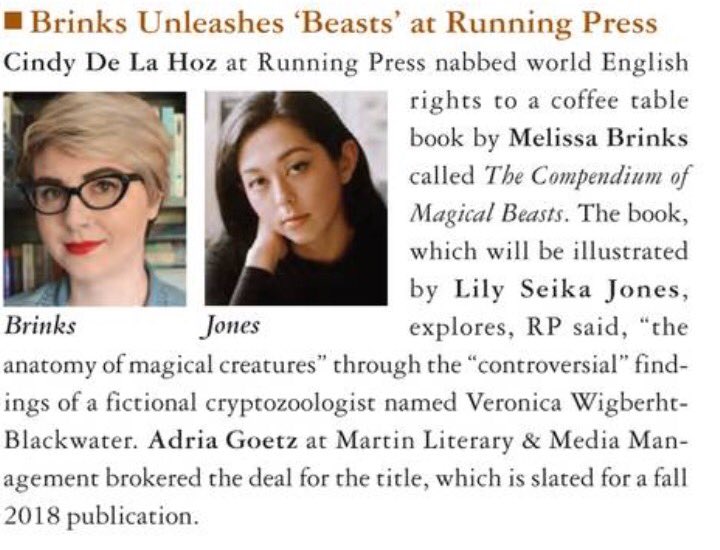 The day I got the email from Adria asking me if I’d be interested in working on this book was the same day I got rejected for a job I really wanted, a job that would give me health insurance and regular work in a time when those two things were hard to come by. I’d just left the company I’d been with for two years, hoping I’d be able to make it on my own in freelancing. I had yet to sell or even pitch anywhere as a freelancer, and was seriously considering going back to school because everything in December of 2016 was so incredibly uncertain that I thought some stability might help.

Since then, I’ve published my first piece as a freelancer (it’s on white supremacy in Harry Potter, and you can read it in the current issue of Bitch Magazine). I’ve pitched elsewhere and been both rejected and accepted, and I’m formulating new ideas all the time. I also apparently wrote something good enough that Running Press is willing to publish it, with beautiful illustrations by Lily Seika Jones and tons of support and hard work from Adria.

It’s been a weird journey. I keep feeling like I have to quit, like I won’t make it, but something drags me back in. I keep finding ways to tell myself this doesn’t really count, that I should quit before everybody realizes I don’t actually know what I’m doing. But it does count, and I have improved, and I will continue to do so because as much as I tell myself I really ought to quit, I just can’t bring myself to do it.